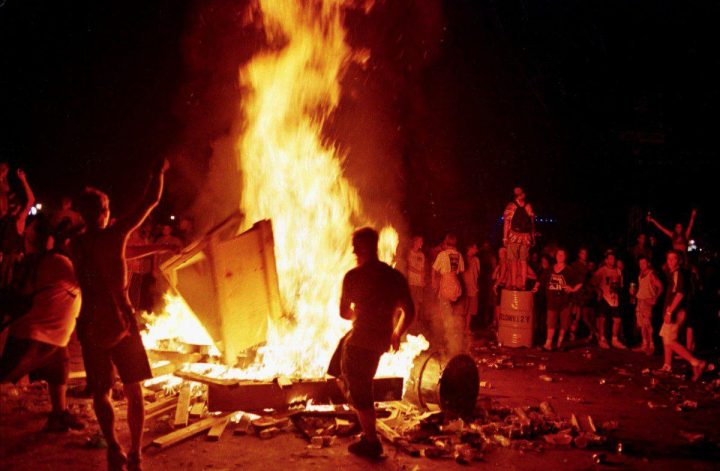 When I finally pulled out of the parking lot at 4:30 am on Monday morning, it felt like leaving a war zone.  Smoke and the stench of things that shouldn’t be burning permeated the air.

I’d seen trucks exploding into fireballs, looting, and bands of young men destroying everything in their path. It was a mob mentality at its worst, something I never want to experience again.

Given all of this, I wasn’t sure how I’d feel watching Trainwreck: Woodstock 99, the three-part docuseries about the beleaguered festival, now on Netflix.

Did I really want to relive that memory?

On Saturday and Sunday of the festival, I’d watched the crowd get increasingly agitated. I saw people tear down the sound tower barriers and climb it – terrified they would fall.  I watched the peace walls come down and all at once it seemed, fires everywhere. I witnessed crowds of people ransack and ignite everything in their path, including random people’s tents and possessions.

Before that horrible final act, I’d witnessed topless women being groped by multiple strangers, people getting hit in the head by full water bottles mixed in with the thousands of empties flying through the air. Thousands more along with paper plates and other assorted debris littered the grounds as there were barely any garbage bins and no real trash services all weekend.

There was also no real security. We all knew it and many took advantage.

From the beginning, there was very much a frat-boy vibe and from Saturday night onward, it really did feel like things could get out of hand at any second.

This was no hippy love-in.  There was tension in the air.

Saturday evening, I cringed as Limp Bizkit’s Fred Durst encouraged the audience to get violent. The following night, I was shocked by the Red Hot Chilli Pepper’s choice of Fire for an encore, which only seemed to condone the arson that was already out of hand.

In 1999, I came back from Woodstock shocked, exhausted, and grateful to have made it home safely after driving from New York to Toronto with so little sleep. After a solid rest, I immediately put the experience out of my mind as my attention turned to preparing for my first Burning Man a few weeks later.

To be fair, I’d had some good times at the festival – dancing to The Chemical Brothers, watching Big Sugar amidst a sea of Canadian flags in the hanger, and experiencing one of the few mellow vibes of the weekend while The String Cheese Incident and later the Dave Matthews Band played.

But, revisiting the rock festival 23 years through Trainwreck, didn’t make me nostalgic. It made me angry.

Angry that more attention wasn’t given to the safety and well-being of the concertgoers,

And angry at the organizers for their unbelievable naivety.

One of those – the late Michael Lang, who was also behind the original Woodstock – blamed the crowd for “not getting” the spirit of that original legendary party.

What he failed to acknowledge was the massive differences between the two:

One took place on a farm. The other on an asphalt tarmac. One was a free festival. The other cost US$150 for a ticket. One allowed people to bring their own food and many willingly shared. The other confiscated all outside food and drink at the door, leaving people at the mercy of vendors who charged between $4 to $12 for a small bottle of water on the hottest days of the year.

That said, price gauging was also an issue at Woodstock 69. A little-known fact is that crowds there also burned down one of the food stands in protest of their overpriced hot dogs… But then some hippies from a commune showed up to feed the masses for free – because they could.

By 1999, regulations, vendor licenses, and the profit motive made this a non-option.

Peace, love, and harmony were on their way out. But, what the organizers failed to acknowledge was that for many attendees of Woodstock 99, they were never in.

In hindsight, what happened at that concert reflected what many Gen Xers felt inside: angry, ignored, and wanting to be treated better than we were.

Like Gen Z today, Gen Xers were promised something that didn’t deliver: the prosperity and opportunities of our parent’s generation.

Yet, our world wasn’t theirs… not that anyone noticed. We grew up in the shadow of a generation so preoccupied with itself that many failed to acknowledge our existence at all.

Watching Trainwreck, this Baby Boomer smugness was evident in Lang’s approach to the festival — oblivious to the rage fueling the music of the bands that were booked (he admits he didn’t know them at all), oblivious to the fact that things were falling apart until he could no longer deny it, and oblivious to the angst of the generation buying the tickets.

In the end, he blames the concertgoers for not getting the spirit of Woodstock, and right there – in doing so – illustrates the lack of care and attention that was at the core of so much Gen X apathy in the 90s.

There is a reason Kurt Cobain is the patron saint of Generation X.

Watching this documentary brought all that dissatisfaction back.

Of course, none of this makes the violence that happened that weekend right. The fact that so many people got caught up in mindless destruction, still shocks me. There is no excuse. (Nor is there ever any excuse for sexual assault).

If this were to happen today, the festival would be lambasted on social media. There would be crackdowns on the instigators. The organizers would be facing a PR nightmare and lawsuits a mile long.

Gen Z had Fyre Island. Gen X had Woodstock 99: one organized by someone with no experience, the other organized by people who should have known better.

Many of those rioters are now bosses, parents, people in power.  Gen Xers are silently taking over the world.

Somewhere along the way, “Fuck you I won’t do what they told me” turned into humming along with “I get my peaches out in Georgia” while driving the kids to their soccer games.

Our rage has turned into bewilderment at the world around us and a silent resolve to just get through it.

At the end of the doc, the filmmakers asked several of the original concert-goers if they would attend again.

If I’d been asked that question, my answer would have been a resounding no. I’m not particularly nostalgic for the 90s. Trainwreck: Woodstock 99 reminded me why.

Frankly, I no longer have patience for vandalism, frat boys yelling “show us your tits” or sweating it out in a field full of garbage pretending to have fun on no sleep because that’s what everyone around me is doing.

Call me an old lady (because at 52, to many people I am) but as Trainwreck: Woodstock 99 reminded me – some things are better left in the past.